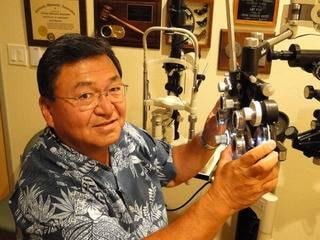 Dr. Gary Mukai has been practicing optometry in Fresno since 1974. He was originally a partner of Dr. George Miyake from 1974 to 1992. Dr. Miyake had a busy, established practice that was started in 1949. Their practice was located in downtown Fresno until 1985. The practice then moved ​to East Shaw Avenue just east of Fashion Faire Shopping Center. In 1990 the practice took on the identity of East Shaw Optometric Group and absorbed the practices of Dr. Gilbert Stocks, Dr. Dewey Jan, and Dr. Robert Hlywa. Dr. Jan and Dr. Hlywa continued to see patients at East Shaw Optometric Group until their retirements. In 1996, Dr. Mukai and Dr. Rick Ideta merged their two independent practices and became partners and continued to practice under the name of East Shaw Optometric Group. This means that in 2017, this optometric practice has been in continuous service for the past 68 years, the longest- operating optometric practice in Fresno.

In March, 2010, the partnership of Dr. Mukai and Dr. Ideta moved to its present location at 7215 N. First St., Suite 101, and changed the name of the practice to Aloha Family Optometric Group. The practice specializes in general optometry, contact lenses, and vision training.